A Sheffield postal worker has raised more than £3,000 for the NHS team which helped him to walk, see and speak again after suffering a brain tumour.

Iain, who works at the Royal Mail Halfway Delivery Office in Sheffield, died twice on the operating table and needed to look through his phone afterwards to remember his wife's name.

Iain was reunited with members of the team who helped him recover as he presented a cheque to Lucy Needham, physiotherapist, and Sarah Morrey, occupational therapist, on Thursday morning.

Asked what he would like them to spend it on, Iain said: "Whatever makes it easier for you guys to do what you do, because that’s how it works - the happier you guys are the easier it is for you to do what you do. Because what a hell of a complicated job. You’re playing with broken computers.

"You met me quite early on in it when I was in a bit of a pickle and I’ve still got a bit of a balance problem and a few things like that but I can deal with them now. For you to be able to see me pretty much doing what I do then you’ve got to feel like you’ve achieved something. You should do.

"It’s a showstopper it really is, so thank you very much."

Lucy Needham said: "It’s wonderful because we don’t tend to see people after discharge, so it’s really nice to see the work that you do and the real life situation that you’ve come back to that we’ve supported you to do.

"It’s an incredible amount of money so it’s an absolute pleasure to think you’ve done all that hard work."

The fundraising smashed their target, but so did the distance of the walk. Detours and re-planned routes due to closed pubs took the route to 17.5 miles across nine hours and nearly 38,000 steps.

Mark said: "Let’s be clear, there’s walkers and then there’s walkers. Never ever challenge a postie into a walking competition because there’s only one loser here and that was me. I was in a mess!

"I’m so glad that we bumped into each other three months ago to start this journey because you never know where it’s going to end. So much good’s come out of it."

Presenting the money to Lucy and Sarah, he said: "I do appreciate you both coming today I really do, and I know you’re so busy and what you guys do is tremendous so a massive thank you on behalf of Royal Mail."

Iain is now looking to head back to support the SCBIRT service in his spare time as a volunteer, where he may get to see first hand what difference his fundraising efforts have made. 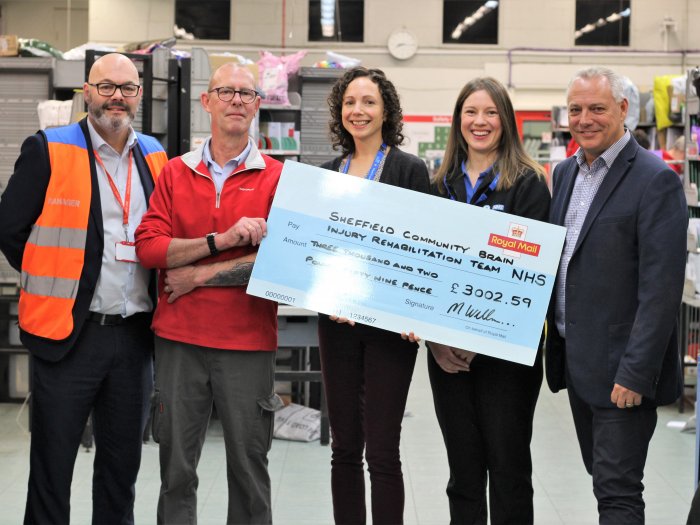