A team of Royal Mail workers will set off on a charity hike this Sunday aiming to raise £2,500 for the NHS service that helped one of them to walk, see and speak again after suffering a brain tumour.

Iain Barker, a postal worker at the Halfway Delivery Office in Sheffield, died twice on the operating table while having the tumour removed in an operation that left him in need of rehabilitation.

Iain said: “I’d virtually lost my eyesight, I couldn’t walk, I couldn’t talk properly, my memory was that battered that I had to look through my phone in the hospital to find out what my wife was called. I’ll never forget that.”

He can now legally drive again, his speech is almost back to normal – “I think I sounds like Sean Connery” he says – and has recovered from the point of needing two men to help him walk around the ward immediately after his operation to now eyeing up a tough 15 mile walk to celebrate how far he has come, as well as to raise money for the SCBIRT service.

Iain said: “It’s a challenge because it’s going to be the biggest thing I’ve done since it happened to me.

“It is to celebrate the fact that I can now see where I’m going and I can walk pretty much alright. After a month of being in hospital and then a further almost complete year off work, much of it spent in the house before I could get out, this is the icing on the cake.”

Iain and his recovery have been supported by Royal Mail, with Mark Wilkinson, Service Delivery Leader, keen from the very beginning to organise the charity hike.

Mark said: “This is a massive challenge for him and I’m sure he can do it. They’ve dragged me along as well which is going to be fun and I’m sure we’ll be alright!

“As tough as it is, we decided to do this walk to celebrate and to raise a few grand for the people who saved his life and put him back on his feet.”

Iain, Mark and three Royal Mail colleagues will set off at 7.30am on Sunday 24 October from Bakewell – the site of Iain’s first base in the job 15 years ago.

Iain said: “You lay there in hospital thinking you’ve blown it and you start thinking about places you’ve been, things you’ve done and people you’ve known that you really like and enjoyed. Working in Bakewell was one of them. I want to walk past my old office.

“After the tumour was removed there were a lot of things that were wrong, some of which I’m going to have to live with for the rest of my life, but at least I’ve got a life to live and I can get on with it now.”

Mark Adams, Team Manager at SCBIRT, said: “We work with our service users to help them embrace life and this challenge is all about that. It’s fantastic to see Iain and his colleagues celebrating the strides he has made in his rehabilitation.”

It’ll be a first class day out for the team from Royal Mail, although with temperatures beginning to drop they’ll be breaking from tradition and shunning the shorts.

Find out more about the support offered by the SCBIRT service at shsc.nhs.uk/SCBIRT 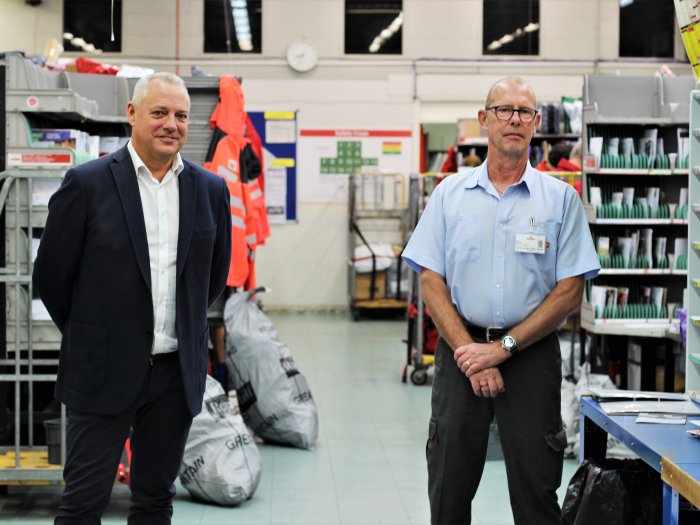