The NHS in Sheffield has taken the next step in its commitment to LGBTQ+ inclusivity by opening new rainbow crossings at three of its main sites this week.

The crossings have been fitted at Michael Carlisle Centre in Nether Edge, Longley Centre in Fir Vale and Forest Close and Lodge near Middlewood.

Dr Justin Gardner, speciality doctor and co-chair of the Trust’s Rainbow staff network group, said: “Even though we’re living in the 21st century we know that lack of acceptance about people’s gender identity and sexual orientation still has a really big impact on people’s mental and physical wellbeing, and also effects their confidence in accessing services when they need it.

“As a gay man who’s worked in the NHS for the last 25 years, I’m so proud that we can promise people when they come to our services that they will be accepted without judgment and supported regardless of their sexual orientation or gender identity.”

The openings saw 42 staff from across the three sites gather to pose with the crossings, cut the ribbon and celebrate the statement the Trust has made.

Michael Rennison, assistant psychologist at Forest Lodge, said: “It’s about the feeling of safety to know that my sexuality, my personality, everything like that is always going to be safe and not judged for who I am and what I am. It also gives that view that hate is not welcome here and I think that’s really important.”

The Rainbow group was set up to give LGBTQ+ staff and allies a voice within the Trust and to make sure LGBTQ+ issues remain on the agenda of every level of decision making across the organisation.

The group has already set up Rainbow Badge training, letting staff who have completed training proudly wear the badge to show that the Trust is an open, non-judgemental and inclusive place for people that identify as LGBTQ+. 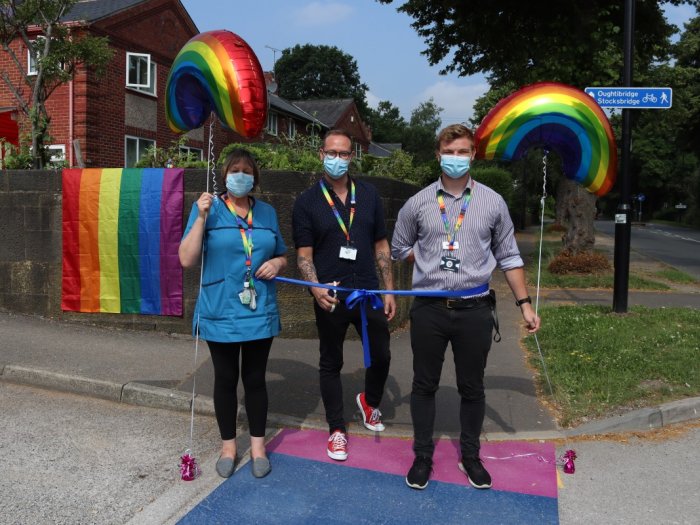