NHS workers in Sheffield were celebrated at a special awards evening this month, hosted by special guest Big Shaun of the Everly Pregnant Brothers.

The awards recognised the amazing achievements of staff and volunteers at Sheffield Health and Social Care NHS Foundation Trust, who provide mental health and social care for people across the city.

More than 100 nominations for staff and services were made this year in nine award categories, which celebrated the achievements of teams, individuals and volunteers.

Staff who have served for 30 or more years in the NHS were also recognised with a Long Service Award. A special honour was also given to two members of staff who were stabbed while off-duty last year.

Guest host of the awards for the first time this year, Big Shaun of the Everly Pregnant Brothers said: “When I was asked to be a part of the awards ceremony I was really chuffed to bits, to be there to celebrate the amazing people in the health and social care team meant so much, especially as my own life has been affected by mental illness.

“The night was wonderful and to hear the stories of the nominees was truly a humbling experience.”

One of the highlights of the evening was the Volunteer of the Year award, which was presented to David Battams who volunteers at Woodland View nursing home in Lightwood.

Presenting the award for Volunteer of the Year, Big Shaun said: “These guys that come and do it for nowt, they really are doing it because they care.”

David Battams, winner of the Volunteer of the Year award, said: “I don’t feel I’m doing anything particularly special. I feel more people should do this, because if they did I think a lot of people would get as much out of it as I do.”

Clive Clarke, Interim Chief Executive at Sheffield Health and Social Care NHS Foundation Trust, said: “David is a great example of the dedication and commitment that all of our staff and volunteers show to the people of Sheffield on a daily basis that often goes unsung.

“Nights like these need to be taken as an opportunity to really say thank you to them for everything that they offer to our city.”

Big Shaun closed the evening with one final message of thanks to the attendees at the awards.

He said: “All I can say is thank you. Keep doing what you’re doing and just keep on being brilliant.”

You can take a look at all the winners here. 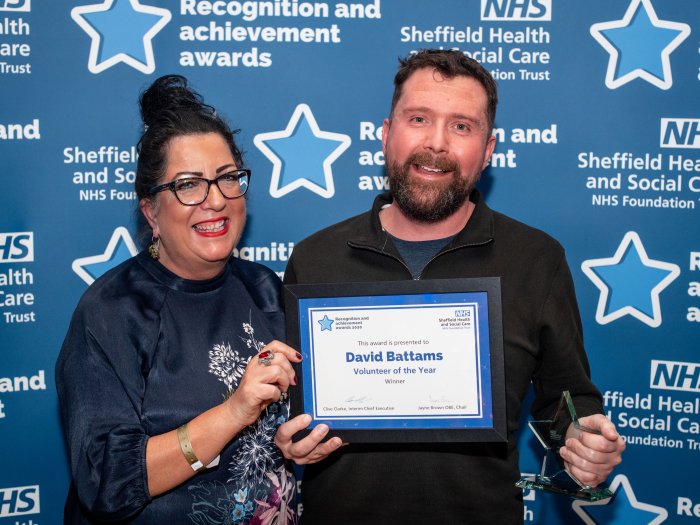